‘Stylish, cutting edge, far-reaching, and lighter than ever…’ this is not the description of the latest gizmo from Apple, but of the new 12th edition of Collins English Dictionary – the home of living English. The English language has more words than most comparable languages due to its history and to the fact that it is the official global language; this is also why it evolves so fast. The new edition reflects this unique breadth and depth including over 100,000 new entries and definitions – and listing 722,000 words in total, it is the largest single-volume dictionary in print.

Despite a good interest on the media’s part in words and language (strange new words, no matter how long or short their lifespan, often make entertaining features) the Dictionary world is very competitive. For example, Chambers Dictionary (I oversaw the previous edition’s PR campaign, establishing it as the number 2 Dictionary in the UK) launched its ‘Word of the Year’ on the same date as Collins was launching its Dictionary but luckily this had little impact on the PR campaign.

Put the Collins English Dictionary in its historical context, both in relation to dictionaries in general and to Collins Publishers in particular. Find original angles linked to the words newly listed.

At the risk of appearing boastful, I’ll describe the resulting coverage as phenomenal. This is one of the main reasons why, as mentioned in the featured quote by Collins’ Head of Marketing, this 12th edition sold more copies in just a few weeks than the previous editions had sold in more than 3 months. 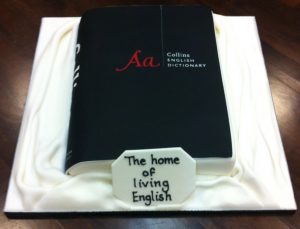 The UK leading booktrade publications covered it (The Bookseller twice: once to announce Collins’ ‘Word of the Year’ launched alongside the Dictionary, and then running a picture story based on the dictionary-shaped ‘launch cake’ (the cake’s shape was my idea)). Bookbrunch, the daily e-zine, published an article explaining why reading a Dictionary could be as thrilling as reading a novel.

Most national newspapers featured this new edition either on paper or digitally. A few examples: a long feature in the front pages of the Times as well as a mention in the same newspaper’s ‘leader comment’ page (circ. 404,155), The Guardian, circ. 164K (in the paper and online), The Sunday Telegraph newspaper (circ. 355K) and The Telegraph Online, The Independent Online and The Independent on Sunday newspaper (circ. 91,644), the London Evening Standard (circ. 898,407), The Metro (circ. 1,348,133); and City AM (circ. 97,259).

As Scotland is the birthplace of the Collins, I obtained much coverage in the Scottish media, e.g. The Scotsman (circ. 37K), the Herald Scotland (circ. 37K+) – they even published a cartoon based on ‘devo max’, a newly included phrase, The Daily Record (circ. 210,858)… BBC Scotland interviewed the lexicographers and also published an article on their website.

Other coverage was obtained in the media across a wide range of professional/ specialist arenas: The Times Literary Supplement (both the paper and the digital editions), the New Statesman; History Today, New Scientist, the Law Society’s Gazette, Marketing Week, and the Times Educational Supplement…